Ganteng has come a very long way in the last six months. Of course we were all deeply saddened when little Ganteng was left behind in January when his mother Gober and twin sister Ginting ventured into their new Jantho forest home without him. Ganteng did not take well to his new environment and failed to follow his mother and sister as they travelled deeper into the forest. Ganteng was coaxed back to the pre-release cages and since this time he has been undergoing intensive release training so he too can make a new life in the forest.

In exciting news, Ganteng is now spending each day in the forest and learning valuable skills from other released orangutans. Ganteng goes into the forest daily with orangutans named Rachmad and Mikki. Staff used positive reinforcement training to teach him to climb and move through trees and also gave him supplementary food to encourage him to stay in the forest and not return to the cage. Ganteng then started following a wild orangutan named Meysin and has sampled lots of different forest fruits.

Ganteng still spends the nights in the pre-release cages with a female orangutan named Locky. Staff monitor Ganteng in the forest very closely and record observations on him.

As Ganteng is now in the final stage of his rehabilitation, if your adoption was on auto-renewal, we have transferred your adoption to Rocky and Rickina from the Orangutan Emergency Centre in Ketapang, West Kalimantan. Rocky and Rickina have been inseparable as youngsters, however Rocky has started to play with other, more boisterous orangutans and has graduated to forest school. Little Rickina remains in baby school. See more information about Rocky and Rickina.

If you wish to be transferred to another orphan or cancel your adoption, please call Rebecca on 1300 REDAPE or email rebecca.buswell@orangutan.org.au

Thank you so much for your support of the very special twins, Ganteng and Ginting over the years. Of course we will never forget little Ginting who so tragically passed away earlier in the year but it is amazing to know that little Ganteng is now doing so well in the forest. His journey to freedom is now almost complete and has been made possible with generous support from his adopted parents such as yourself. 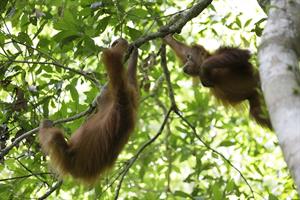 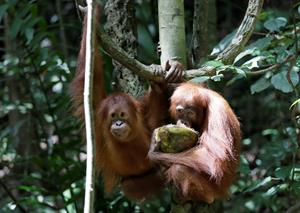