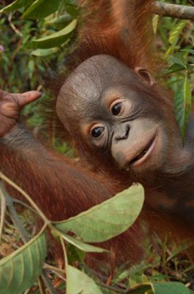 Orangutans are great apes, as opposed to monkeys, and are closely related to humans, having 97% of DNA in common.

Orangutans are extremely patient and intelligent mammals. They are very observant and inquisitive, and there are many stories of orangutans escaping from zoos after having watched their keepers unlock and lock doors.

Extinction in the wild is likely in the next 10 years for Sumatran orangutans and soon after for Bornean orangutans. Both the Sumatran species (Pongo abelii) and the Bornean species (Pongo pygmaeus) are classified as Critically Endangered according to the International Union for the Conservation of Nature and Natural Resources (IUCN) Red List of Threatened Species.

The Sumatran and Bornean Orangutans' rainforest habitats are disappearing at an alarming rate due to deforestation and clearing of the land for pulp paper and palm oil plantations, with the remaining forest degraded by drought and forest fires.

In Malay and Indonesian orang means "person" and utan is derived from hutan, which means "forest." Thus, orangutan literally means "person of the forest." 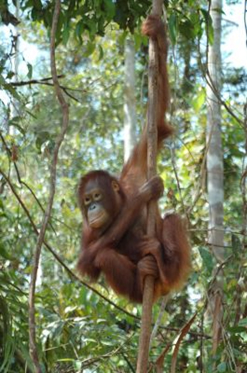 Orangutans' arms stretch out longer than their bodies - over two metres from fingertip to fingertip - and are used to employ a "hookgrip". When on the ground, they walk on all fours, using their palms or their fists.

When males are fighting, they charge at each other and break branches. If that doesn't scare one of them away, they grapple and bite each other.

For the first 4-6 years of his/her life, an infant orangutan holds tight to his/her mother's body as she moves through the forest in search of fruit.

Like humans, orangutans have opposable thumbs. Their big toes are also opposable.

Orangutans have tremendous strength, which enables them to swing from branch to branch and hang upside-down from branches for long periods of time to retrieve fruit and eat young leaves.