Ganteng and Ginting both continue to grow and do very well with their mother Gober. Ganteng weighs approximately 10kg while his sister Ginting weighs about 8kg.

The twins have quite different personalities, with Ganteng being quite brave and confident while Ginting is timid and much more reliant on her mother. Ganteng is very active and explores all new enrichment items eagerly. He likes to sleep in the rubber tyre in the afternoon by himself. This is his favourite sleeping position. He will often play in the hammock with Ginting who is now much more active and playful.

Ganteng eats all the fruits that are given out.  At times he does not eat some of the vegetables, but will often try many types throughout the day.  The keepers will often see Ganteng tasting the leaves that have been given to them. This is a good sign before he is released. Ganteng will often drink all the milk given by the keepers in the morning. Ginting is the opposite of her brother when it comes to eating.  Ginting will follow her mother Gober and only eat the foods that Gober eats. She will not come down to feed until the keepers have left the area.

Both youngsters behave like wild orangutans and do not like the keepers. They often kiss squeak at them and go to their mother for reassurance when the keepers are close by. This is very good since it is hoped they will be released into the wild in the future.

Ganteng and Ginting are both still learning important skills from their mother including nest building and what foods they can eat. Ganteng now makes his own nest each night to sleep in while Ginting still sleeps in the same nest as her mother. The twins will soon be fed more forest fruits to help prepare them for release into the wild with their mother in the future. 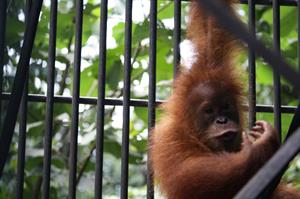 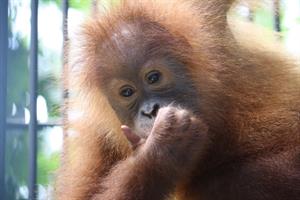