The twins have started eating fruits and vegetables. Ganteng will now be quite brave and take the food by himself, even if the technicians are near the cage however Ginting will only eat what her mother Gober has. Ganteng will also drink milk from a container that is given to him by a technician. His daily milk consumption is 300mL. Ginting will only drink milk from a bowl that is left in the cage by the technician. Her daily milk consumption is 200mL.

Ganteng has grown into a very active and curious young orangutan. He likes to play away from his mum Gober. However he will quickly return to his mum if people he is not familiar with approach the cage. He will also make the typical orangutan kiss-squeak noise when he feels uncomfortable. Recently, Ganteng had a tantrum when some long-tailed macaques from the nearby forest approached the cage. He kiss-squeaked and banged the swing in the cage to show his disapproval at the uninvited visitors. Ganteng is also a curious orangutan and shows great interest in new enrichment that is given such as whole coconuts.

Unlike her brother, Ginting has a very different nature. She is very timid, less active and always stays close to Gober, especially if there is someone near the cage. She still suckles from Gober a lot and she will only eat anything that Gober has, sometimes taking the food from Gober’s mouth. Ginting will also kiss-squeak when feeling uncomfortable but usually whilst hiding in Gober’s protective arms. 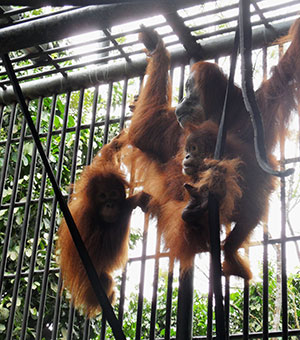 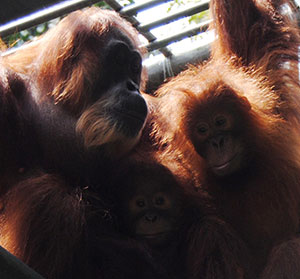 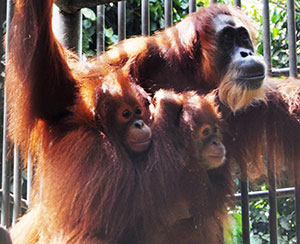